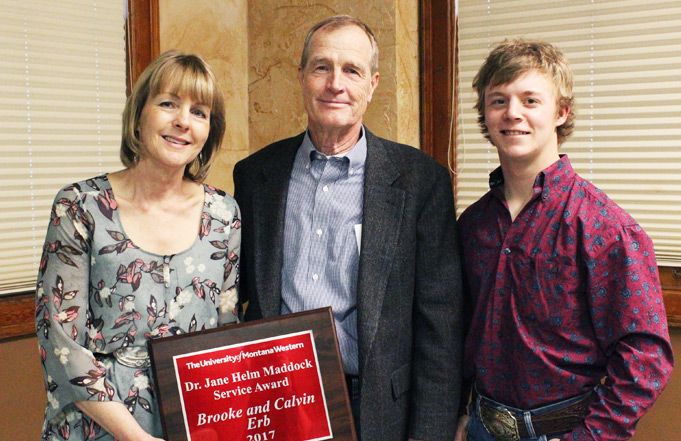 The Awards Dinner is an annual ceremony held to honor of individuals who have greatly supported the University of Montana Western and the Dillon community.

Dr. Jane Maddock is a former Professor Emeritus of English at the University of Montana Western. During her 17 years at Montana Western, she created the honors program and served as its chair along with her duties as chair of the curriculum committee and the English department.

The recipients of this year’s awards are Calvin Erb, Brooke Erb, and Vana Taylor.

Calvin Erb is the Chairman of the Board of Directors for the Bank of Commerce. He is also the president of the Montana Center for Horsemanship.

Brooke Erb worked for 14 years as the Office Manager for Associated Students at Montana Western. She also served as co-chair for the DUI Task Force after working as the director of UMW’s Safe Ride Program.

Brooke and Calvin Erb continue to serve the University, hiring several students each year to work on their colt/cow/calf yearling operation. They have also been key donors for the Natural Horsemanship program.MADDOCK-AWARD-2

Vana Taylor with Kirsten Love at the Lewis and Clark Ballroom receiving her award.
Vana Taylor has worked in Beaverhead County for the past twenty years. She owns and operates Taylor Realty in downtown Dillon, Mont.. She also served on the board of directors for the DUI Task Force along with several other boards in the community. She remains a diligent supporter at fundraisers and functions for Beaverhead County High and Montana Western.

On this year’s honorees, she said, “These individuals truly embody the generous spirit of the award’s namesake and their devotion to this community and campus are remarkable.”

Thank you and congratulations to the winners for their continued support of the university.