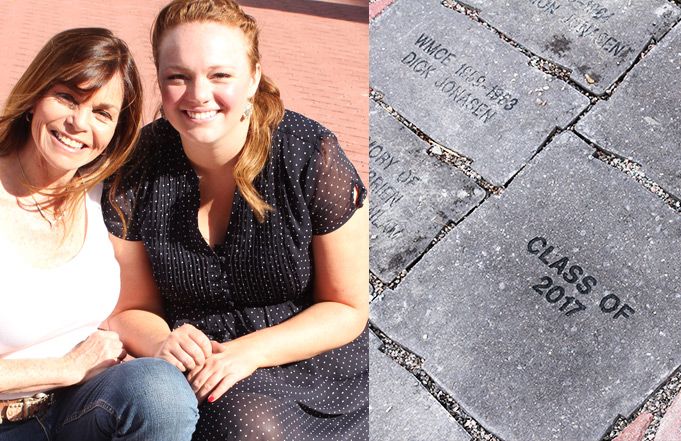 The Legacy Plaza sits comfortably in the shadow of main hall, the oldest building at Montana Western which once served as the sole facility for instruction. The Plaza was created as a gathering place for students and community members.

The Pioneer Savings and Loan Amphitheater resides within the Legacy Plaza. In good weather, drama students can be seen participating in table reads, spread out in varying postures, shouting lines around the semicircle.

At other times, the site is used as a venue for school clubs. Recently, Twisted Ink, the university’s literary journal, held a reading in the amphitheater to celebrate the release of their yearly print publication.

Adjacent to the plaza are the library, dormitories, cafeteria, and bookstore, making the Legacy Plaza a place nearly every student walks past on a daily basis. The bricks under their feet are engraved with the names of graduates, memorials to deceased loved ones, and famous quotes. KXLF TV purchased a brick etched with the words of Edward R. Murrow: “Difficulty is the excuse history never accepts.”

Another anonymous purchaser left the words “don’t tread on me” carved into the ground of the busy pathway.

On May 5, 2017, new graduates met with alumni from the class of 1967 to witness their own legacies being placed in stone. From now on, each graduating class will have their own brick added to the growing collection.

“There were about seven 50-year alum who showed up. One was an ex-jockey, another was a rodeo queen,” said Special Events/Alumni Coordinator Vanessa Graham.

Ava Duncan was at the event as a representative for the class of 2017. On meeting the 50-year alum, she said, “They were hilarious; they were full of spunk. I think it was just really cool to meet people who fifty years later are still talking about this university like it changed their life.”

“It was inspiring to meet these people who’ve lived a life, and they still feel the same way about the school as I do.”

I asked Duncan what kind of a legacy she hopes to have left at Montana Western. She said, “I hope if students or anybody else remembers me, they remember how I treated them. I would hope that if I had any legacy it would be about how people felt when they were done talking to me.”

Modestly, she said she wasn’t sure if she left much of an impression on the school, but she was positive the reverse was true. “I do know that the school left a legacy in me. That’s for dang sure. I am not the same person I was four years ago, and I’m grateful for it.”

The engraved bricks in the plaza serve as a reminder of the rich history of the university. Much like history itself, the messages here are often overlooked by people caught up in the daily rush of life. However, they will always be there, waiting for anyone who finds the time to remember.

Commemorative bricks of varying sizes can be purchased at the University of Montana Western Foundation and Alumni office in the Roe House. Call (406) 683-7305 for more details. You can order bricks online at www.umwfoundation.org.