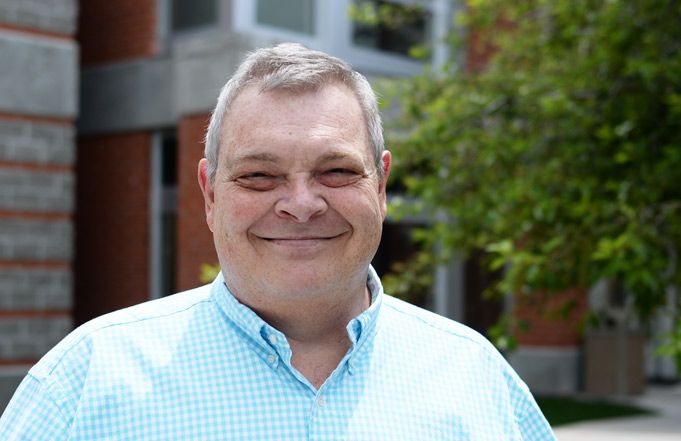 Mike Schulz’s local library in Sheridan, Mont. was in the same building as the firehouse and the one-cell city jail. None of the bookshelves reached higher than four feet, and they all fit comfortably into a room the size of his current office. There, among the firefighters and thieves, Schulz began his lifelong love affair with the written word.

His obsession with books has taken him all over the world. He’s seen operas performed amongst the ruins of ancient Rome. He’s visited colossal libraries in Washington D.C., Oxford, and Cambridge.

He even worked as a librarian aboard a cruise ship for Semester Abroad. It was in a repurposed casino bar. The reserve books were kept behind the bar along with the alcohol. It was locked behind iron bars at night.

His travels also led him here. He’s been the library director at the University of Montana Western since 1989. Now, after over a quarter-century spent in the stacks, Schulz is retiring.

“It’s terribly hard. I didn’t know it would be so difficult to retire. Montana Western is a family,” he said.

Things were very different in the 80s when Schulz accepted his position as library director.

“When I first came here there was one computer. It ran dialogue (an early progenitor to the internet). You were charged by the second, so the key was to get in and out as fast as possible. You had to write in archaic symbols, talk about complicated.”

Schulz loves an ancient tome as much as the next librarian, but that hasn’t stopped him from embracing new technology. He helped digitize the library’s archives, and he loves to download audiobooks. Throughout his career at Montana Western, Schulz has worked hard to ensure the library changes with the times.

He was often inspired by his tours abroad, like when he saw self-checkouts at a library in Auckland, New Zealand, and decided to bring that concept to Montana Western.

On the rise of the information age, he said: “It’s like the dandelions. There’s nothing there, then after the rain they start popping up everywhere. That’s what it’s like seeing how fast technology and the spread of information is happening.”

Some people thought that the internet would leave libraries obsolete, but Schulz believes they are as relevant as ever.

“As so many librarians have said, our job is teaching information literacy. The internet is exciting; it’s wonderful, but now you have the problem of finding credible sources of information. In the past, people relied on the library for peer-reviewed sources. If it was in the library, you knew it was quality.”

Another problem he cited is the monetization of information online: “Studies show that most students only use their first search page and pick something within the top third. Google was paid to place whatever is up there as the first result. So it’s not the most credible source; it’s a commercial.”

Even though the world is different in many ways, Schulz said that a lot has stayed the same for librarians: “Our core reality is still true. We are still trying to help people access the world of information.”

Schulz worked as a teacher before becoming the library director, but he’s found his work at the library much more gratifying: “I’ve been thanked more as a librarian than I ever was as a teacher. Students have always had that struggle. Teachers give students pain, and the librarian acts as a balm on their ‘wounds.’ We help them find the information they need for an assignment that’s driving them crazy.”

So technology has changed, but people stay the same. It makes sense. That’s why patrons of the library still find so much fulfillment in the old stories on the shelves. No matter how high-tech the world becomes, many aspects of the human experience will always be universal.

Lastly, I asked Schulz what his plans are for retirement.

“I would love to write a children’s book, but I’m gonna start with something easy, a family history. I’m gonna go travelling. I need to fill up the holes on my map. Now I’ll have the time to take the road less travelled. I drive back and forth between Missoula all the time, but I’m always busy. I need to get back for a meeting, or I wanna get home because I’m tired. Now I can take one of those side streets and see how far it takes me.”

Of course, he also plans to do a lot of reading: “Who doesn’t love to read. I can’t exist a day without books,” he said.

During our interview, Schulz told me one of his favorite books is “Miss Rumphius” by Barbara Cooney. It’s the story of a librarian who reads about exotic places and decides to see them with her own eyes. In many ways, it’s the story of Schulz’s life. Authors have the ability to transport their imaginations onto the pages of a book, so it seems fitting that a librarian would be able to take the pages of their favorite story and turn it into reality.