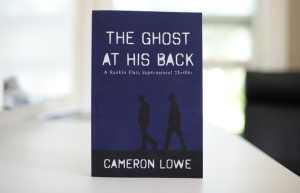 I recently had the privilege of interviewing Cameron Lowe. The former Montana Western student is a writing machine. He’s already cranked out five novels in his self-published Rankin Flats series of supernatural thrillers and has even greater plans for his fictional worlds in the future.

Lowe answered my questions in the same style that he writes his prose; his responses were crass, self-deprecating, funny, honest, and heartfelt.

The first question I asked him was a simple one about his time spent at Montana Western. As I soon came to expect from him, his answer was characteristically humorous and frank.

“Western was blessed by my manly jawline, my smoldering poopy brown eyes, and my svelte ‘let’s call it 250 pounds of muscle that only kinda resembles fat’ from the fall of 2000 to the spring semester of ’02.”

Lowe is legally blind, and I didn’t want to make the entire interview about his sight. I assumed he receives questions about his vision non-stop, and I know that there’s much more to him than that. At the same time, he writes about his disability in such a beautiful and candid way, I felt it’d be a crime to deprive people of his unique insights.

Lowe addressed these issues in a question I asked him about self-publishing: “I try not to lean on my legal blindness as a crutch. It’s one thing to do an interview like this, where I hope to inspire others on disability to grab up a pen and write down their great ideas to hopefully help put themselves back on their feet. But when I’m pushing a book out to advertisers, I try not to mention the blindness. I want my work to stand on its own.”

Lowe and his brother were both born with severe macular degeneration. In his early twenties, Lowe’s vision rapidly deteriorated. No longer able to drive, and afraid his favorite hobbies, reading and gaming, would make his sight even worse, he decided to attend the Colorado Center for the Blind to learn to cope with his new reality.

Lowe chronicles his time spent there, and his everyday struggles, on his blog entitled “Legally Blind.” It’s a fascinating insight into a disability which is often misrepresented in fictional worlds.

I asked Lowe what he thinks of the way partially and fully blind characters are portrayed in popular media.

He said, “We’re starting to see this misrepresentation of the blind as having these superpowers of sight with sound. Echolocation’s a real thing, but it’s not like we’re actually mapping out rooms around us like you’d see with sight.”

“Next time you’re at a busy intersection just waiting around, stop, close your eyes, and really listen to the flow of traffic. There are patterns there. They’re hard to pick out at first, sure, but the blind learn to identify those flows of traffic, to pick out the specifics among the sea of noise. It’s not a super power. It’s just something we do. Or that the fully blind do, rather – I’ve studied at the Colorado Center for the Blind and spent a good portion of six months wearing sleep-shades as I walked around Denver, so when I say ‘we,’ that’s what I’m referring to.”

That immersion into total darkness helped prepare Lowe for his uncertain future. Lowe is not fully blind, but his remaining eyesight isn’t guaranteed. At any time, he could lose what little sight he has left, but he chooses to focus on what he’s grateful for rather than live in fear.

“Blindness, for me, is not the end of the world. It’ll mean I lose some of the things I love, like getting to see loved ones’ faces or seeing my goofy pug’s cocked head when I ask him if he’s ready for a walk. But those things don’t cease to exist just because I could go blind. Struggles will be had, and I’ll have days when I’ll be a miserable cuss, but none of that means my life will suddenly end.”

“I’ll still be writing. I’ll still be listening to plays in the off-chance I move somewhere where theater’s more of a thing. I’ll still be having awkward conversations with women at the bars, trying hard not to shout, ‘Please, oh God, have pity and say you’ll go on a date with me!’ Fear of being blind was just a hurdle, one I didn’t so much leap over as crash through and kept blundering onwards – the Cameron Lowe style.”

I also asked Lowe about writing, his own and the works of others. As far as authors go, he cited Stephen King, Douglas Adams, Shakespeare, Tolkien, Robert McCammon, Richard Morgan, and Charlie Huston as some of his favorites.

He thinks video games haven’t reached the narrative complexity of novels yet, but they’re on their way, and he’d love to help the industry get there.

Ghosts are a focal point of his series, so I asked Lowe what he finds so fascinating about them:

“Here’s the funny thing – nothing, really. Well… okay, not ‘nothing,’ but I don’t particularly hold any fondness for ghosts or ghost stories. I don’t even believe in them (yet I identify as Christian, so you figure out that philosophical quagmire). The whole notion of ghosts being in my writing came about as an internal conversation when I was taking a shower one day.

“I was thinking about the ramifications of someone being stuck here on Earth after they’d died, and that if ghosts did exist, they’d basically be in purgatory. Then it occurred to me that if good people went to heaven, bad people went to hell, then what would that make ghosts?”

All of the stories in Cameron Lowe’s supernatural detective series take place in Rankin Flats. It’s a fictional metropolis set in Montana. The name comes from Montana legend Jeannette Rankin, the first woman in the country to hold a national office.

Lowe describes Rankin Flats as “something like Denver, but far more run-down and rotting while also in the middle of an era of inexplicable expansion.”

The last thing I asked Lowe was to sum up his series for potential readers:

“The Rankin Flats supernatural thrillers are secretly less about the supernatural and the thriller than an exploration of a man lost to darkness who finds his way back to the light thanks to his ghostly best friend and the hope of a healthy, real relationship with a spirited, scarred acquaintance. Together, the three of them take on a variety of psychopaths and monsters both real and metaphorical while trying to live out a semi-normal life – or as best as they can manage, anyways.”

“Oh, and there are cannibalistic mystics, fart jokes, shapeshifters, a bit of sex, and a telekinetic on the brink of insanity too. There’s something for everybody!”

All of Lowe’s books are available on Amazon.com in Kindle and paperback formats. His website, RankinFlatsObserver.com, is where you can find his blog.