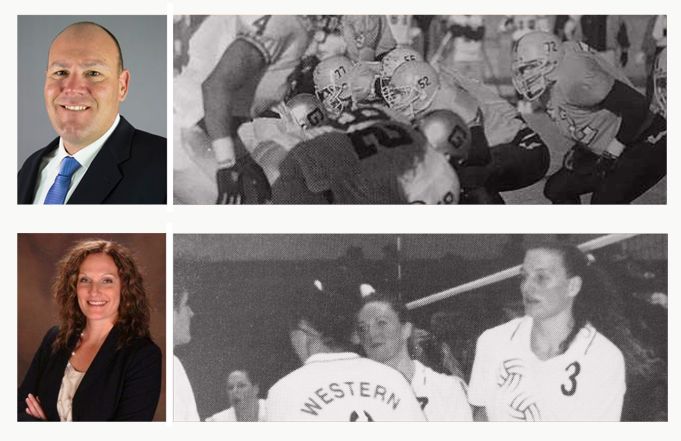 Introduction of 2018 Hall of Fame Inductees and Homecoming royalty announcement

Montana Western Volleyball vs. MSU-Northern at the BARC

Brian Armstrong is a 1998 graduate of the University of Montana Western. He earned a Bachelor of Science Degree in Elementary Education as well as competed on the football team at Montana Western from 1992-1995. Armstrong was a member of the Bulldog teams that won three straight Frontier Conference championships making it to the second round of play-offs in 1995 and finishing seventh in the nation. Armstrong was named to the All-Frontier Conference Team in both 1994 and 1995. For his outstanding play in 1995, Armstrong was named first team All-American. His fondest memories of Montana Western were beating Glenville State in 1994 and “lots and lots of bus trips.”

Julie’s fondest memory as a student-athlete was the championship match against Carroll College that was held in the Straugh gymnasium. Huston remembers the entire town filling the gym, making it “seem like an Olympic event.” After winning all three games and the Frontier Conference title, Huston felt as though the volleyball team were treated like legends around Dillon.

Huston is currently a regional sales director with Paychex Inc., managing the Mid-Atlantic region of the Retirement Plan Sales Division in Pennsylvania. She was the first female director and helped spearhead the company’s “Women in Leadership” council, which has provided professional development opportunities and helped to promote many women across the organization. She and her husband Sam have three children, Brandt (19), Alyssa (16) and Jake (6).

The 1967 Montana Western Baseball team finished the season with a record of 8-1, garnering them a Frontier Conference championship. The team defeated both Black Hills State (South Dakota) and Minot State (North Dakota) for the NAIA District 5 championship. The district championship games were played in Billings and the win against Minot State ended a Minot 20 game winning streak. The team was coached by Bob Jesse and assistant coach George Nelson with additional support provided by student-athlete Don Poole.

Please call the Montana Western Alumni Office at 406-683-7306 or visit https://www.umwfoundation.org/ for more information and to reserve tickets for the Hall of Fame brunch and induction ceremony. Tickets are available for $15 for adults, $7 for ages 6 – 17 and admission is free for ages 5 and under.