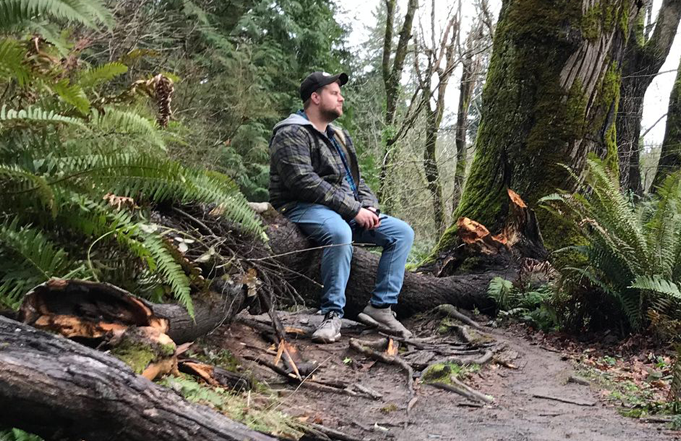 Olson majored in Literature and Writing with a concentration in Creative Writing. He then received his graduate degree from the University of Montana, acquiring a MEd in Curriculum and Instruction with an emphasis in Secondary English. Olson’s writing journey started when he was an undergraduate at UMW.

For his thesis, Olson decided to attempt writing a complete novel. “It was more than a bit of a mess, and I probably overwhelmed my thesis advisor, Dr. Francis Davis. But we all have to start somewhere,” said Olson.

He continued working on the novel and then decided to write four more. He started writing his fifth novel, “Earth to Charlie,” during the winter of 2014.

It took Olson nearly eight months to write the first draft and he spent another six to eight months revising his work before sending it out to agents. Eventually, the novel was picked up by Simon & Schuster.

“Earth to Charlie” is about a high school outcast who spends his life hoping to be abducted by aliens. The funny, quirky novel focuses on finding your footing in a world that sometimes feels like Mars. The story is based in Whitehall, Mont.

“I’m constantly inspired to write because it allows me to discover more about myself and life in general. It’s a way to never stop learning,” said Olson.

Olson taught high school English and theater in Helena at both Capital and Helena High for four years. During his time as an educator, he continued to write.

After teaching in Helena, Olson was accepted into the graduate producers program at UCLA, focusing on film and TV production. He graduated from the program in June 2017, completing his second master’s degree.

Since then, Olson has worked as an independent producer and is writing more novels. He currently splits his time between his hometown of Butte, Mont. and Los Angeles, Calif.

“Earth to Charlie” is available for preorder wherever books are sold. If you are interested in learning more, please visit Olson’s website at www.olsonwrites.com