UMW Alumna Helps Out Behind the Scenes for TV Series 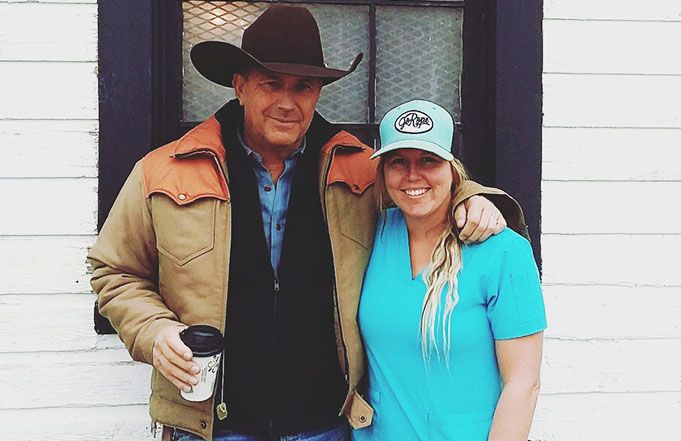 It was UMW’s block scheduling system that initially drew Anderson to the campus. The dedication, focus, and time management skills she learned while being involved in such an immersive approach to education, Anderson credits is what helped her get where she is today. Currently Anderson works as a large animal veterinary technician.

“As a vet tech you’re not only a nurse for the vet you are working under, but you are also one of the main people handling the horses and animals. The knowledge I gained from my Natural Horsemanship classes sure has helped me become the horseman I am today,” Anderson stated.

Anderson accompanied the large animal veterinarians she worked for as they advised film makers during the production of “Yellowstone.” The Paramount Network series follows the life of John Dutton, a Montana ranch owner whose character is played by the infamous Kevin Costner. The series began filming in August 2017 on the Chief Joseph Ranch near Darby, Mont.

On the days they were filming around animals, Anderson and the veterinary professionals would often be called to the scene to answer questions and watch over the welfare of the animals. If any animals ever needed looked at for health reasons, they were right there to help.

Anderson, who continues to barrel race in her spare time, was offered the opportunity to ride horses while helping out behind the scenes. One of the scenes Anderson helped with even made it into the final draft of the film.

The first season of Yellowstone aired on June 20, 2018 and it was announced in July that the series had been approved for a second season which is slated to start in the summer of 2019.

“It has been a once in a lifetime experience,” Anderson said while reflecting on her time spent helping with a major Hollywood production.

It is a whole different world working with Hollywood movie stars and producers Anderson will admit, but she truly believes her time at Montana Western prepared her for this opportunity.

To learn more about Montana Western and our unique block scheduling system, please visit the UMW website or call 877-683-7331.