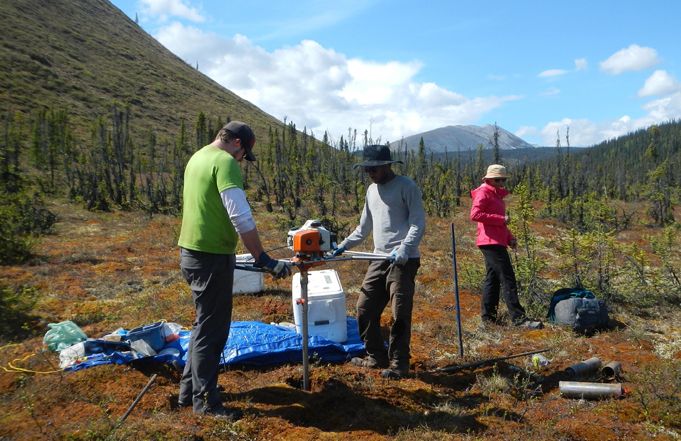 Climate researchers who study the pre-historic era rely on preserved physical characteristics of past climates, called proxies, to reconstruct the past. At high latitudes, precipitation isotopes preserved in ice core records are one of the most valued tools used in these studies. However, ice cores have only been developed in glaciated regions where surface ice remains frozen year-round.

Porter and his team, which included Schoenemann, were able to discover that ice core-like records can also be found in permafrost and can also be used to reconstruct past temperature histories and place recent climate changes in a long-term context.

“Much of our current understanding of past climate is restricted to regions where glacier ice is prevalent, however, the development of this novel technique will greatly broaden both the spatial coverage and temporal reach of climate histories we can obtain in polar locales,” Schoenemann stated.

The research team recovered a sequence of permafrost cores from a peatland in central Yukon that contains a continuous 13,600-year record of precipitation isotopes that they used to estimate long-term changes in summer temperature for that region.

“Each centimeter of ice in the permafrost cores represents 20 to 30 years of mainly summer precipitation. Importantly, the water isotopes in the ice can provide detailed estimates of past summer temperatures in this region,” explained Porter.

Based on the results of the study, historical climate data indicates that this area has increased in temperature in comparison to other high-latitude regions. This region, a part of the Yukon called Eastern Beringia, has experienced warming of just over 2°C over the past century, which is above the global average and above the average of the Arctic region in general.

The impacts of warmer temperatures across the North are rapidly increasing and Schoenemann is honored to be part of such cutting-edge research stating “One of the exciting aspects of this work, which I’m delighted to be part of, is that it shows you can apply ice core techniques to permafrost.”

To read the research article in its entirety visit the Nature Communications website.