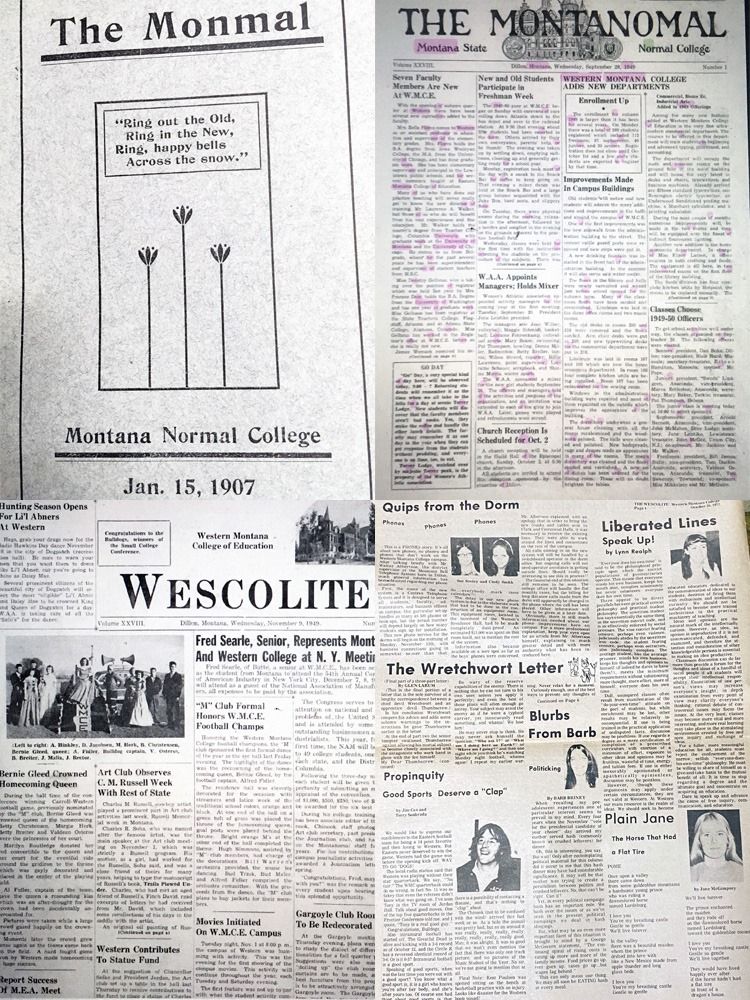 The very first student publication on campus was the Monmal. In its very first issue, it was described as both a paper and a magazine. The first issue debuted in December of 1906. This was how the staff introduced the paper/magazine to the campus.

“Our first issue,” the words have a fearsome sound, but in spite of all; short time, short funds and short material, here it is. We plan to make this paper represent the college, not statistically, but in a literary and social way. The paper was begun by students, written by students and partially supported by students, and our plan is to make this paper every month more for the students and by the students. In fact, we wish to make this a permanent institution, a successful student magazine. The Monmal is derived from two words, Montana and Normal. The first three letters of Montana and the last three of Normal form Monal, the name of our paper and a sure sign of continual prosperity.”

A one-year subscription was $1.00 with a single issue priced at $.15. The Monmal was part magazine and part newspaper. It’s content contained short stories, poems and select campus culture news items. The advertising sponsors including early Dillon businesses such as Riley, the Druggist and, Dillon Bakery and Confectionary.

That first issue featured short stories such as; “Walter’s Airship”, “The Thanksgiving Turkey” and “The Halloween Story.” There was a also a review of the Public Speaking Club, various campus lectures and a meeting of the Kappa Nu Society. Sadly, the Monmal printed its last issue in 1917.

The student newspaper continued publishing under the Montanomal banner until 1949. In 1949, the school’s name changed from Montana State Normal College to Western Montana College of Education. There were suggestions from the students to change the name of the campus newspaper to stay in step with the name change of the school. In October of 1949, a campus wide contest sponsored by the Chanticleer Club was held to pick a new name.

The Wescolite was the winning entry and came from Dillon student and student reporter Donna Carrigan. Her prize, $10.00. The first issue with the new name was published Wednesday, Nov. 9, 1949.

Glen Larum, a 1973 graduate of Western Montana College, spent one year in the Wescolite editor’s chair and reflects back not only on the editor’s responsibility but the culture on the Western campus in the 1970’s from a student’s perspective.

“Almeda Brown was our Faculty Advisor. She let us take seriously the line in the masthead that said: The Wescolite is an independent student newspaper and its editorials do not necessarily reflect the opinions of the college.

I had begun my Wescolite career as an oddball columnist, granted a free rein to write about whatever I wanted. I assumed being an editor would be doing more of the same. Someone should have reminded me that you go to college to get an education. I got one.

I found out that, among other things, the editor was responsible for putting the paper to bed, a job that began in the basement of Western’s S.U.B. and finished 57 miles away in a print shop in Virginia City. I’d drive over and, working from a layout we’d designed in the Wescolite office, spend all afternoon cutting and pasting the strips of copy and placing photos on a newspaper-sized sheet, then hand it over to the printer.

Meanwhile, editorials were about the wisdom of showing movies on school nights, the mystery meat at Saga Foods, the firetraps off campus where students were living, and the draft – the military draft. I just wasn’t writing them.

When I finally got my feet under me, I went back to taking my regular turn. The most outrageous suggestion I made was that the college should discontinue the Miss Western pageant, “Sexist, you know”. The following week, Louise Schlegel got her turn in print in the editor’s spot and got me told. Western kept having it. Later in the year, I was the emcee of it. I have to say, I totally missed the irony.

Occasionally, a prescient sports reporter would show you up. Wally Feldt, in his first column, picked upstart Pittsburgh to win baseball’s 1971 World Series in seven games, 4 games to 3. He noted the Wescolite editor was picking Baltimore in just five games and had pointed out that the Orioles had four 20-game winners on their pitching staff. The Pirates won the series, of course, 4 games to 3. He was kind enough not to lord it over me the next week.

One of my most interesting editorials that year was about the Viet Nam war, a major subject on campus in those days. I wrote a couple of paragraphs lamenting how long it had gone on, then wrapped it up with a poem an old sheepherder had given to me while we played cribbage. It’s needs so much editing that you couldn’t (wouldn’t) print it today.

One final note, the RMCPA Regional Convention that year was held in Santa Fe, N.M., too far away for us to attend, but we sent entries to the annual contests. The paper not only won an award for general excellence, I won third prize for editorial writing.”

An interesting footnote to this. Larum taught a few years after graduation but moved away from education to became the editor of the Fort Stockton Pioneer in Fort Stockton, Texas. He held that position for 12 years. I wonder if there is anyone else who served as editor of the Wescolite and later worked as an editor of a commercial newspaper?

In 2002, the Western students thought the paper should have another name change. So, the paper became the Western Wire. The change didn’t sit as well as anticipated and in two years, it was back to being the Wescolite, at least for a few more years.

It’s fun to look back at the growth of student newspapers on our campus, from Montana State Normal College through the University of Montana Western. They reflected the times. Remember the motto of the Montanomal of bringing weekly news, humor and articles of interest to the student body and faculty. That didn’t change in all the years and all the issues of a student newspaper on our campus.

Thank you to the Montana Western Foundation for letting me rumble through the archives and a big thanks to Glen Larum for reviving his days in college journalism.