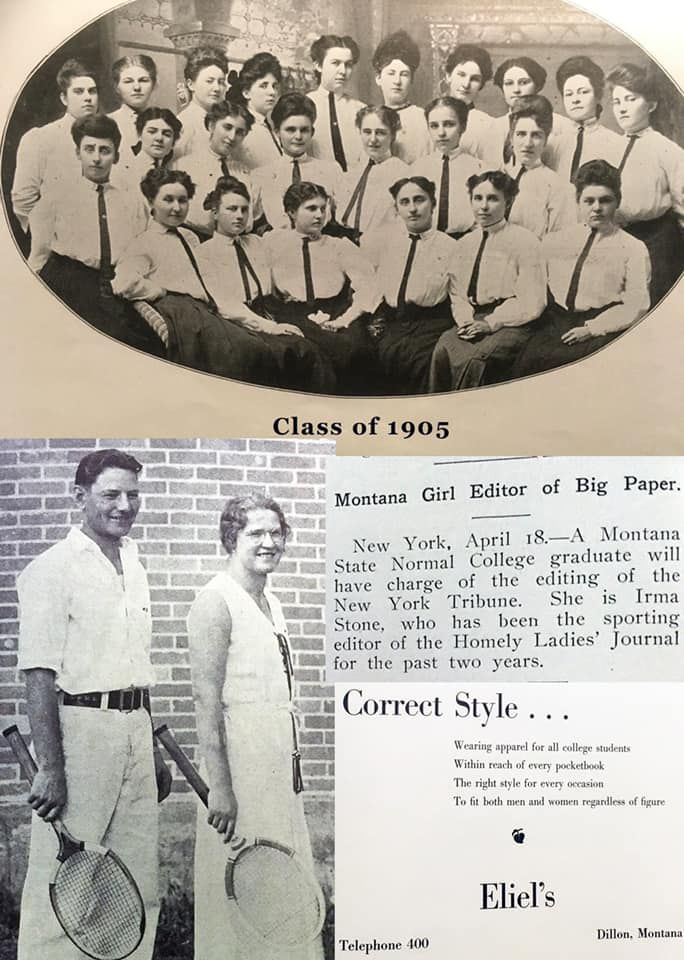 First, let’s jump back to 1905 when the school was called the Montana State Normal College (MSNC) and less than 10 years old. The senior class officers included a president, vice-president, secretary-treasurer and a marshal. Not sure what the marshal’s duties were, but….

In addition to the officers, the class motto was “nothing is too difficult for mortals.” Class colors were cardinal and white; the class flower was the red rose and there was even a class yell which today makes no sense:
Hip - Skitty - Ki -Yi
Wha - Who- Wha
Naughty-Six
Naughty-Six
Rah! Rah! Rah
Like I said, no sense now, but then, probably perfect sense. The class also had a tribute, a history, a poem and a prophecy! All, perfectly laid out in the yearbook , the first in the history of the school.

In the 1910 yearbook, there was a tidbit on the origin of the school. A nice little who, what and why explanation; from the Act of Congress when Montana was admitted to the union to the land set aside for a state normal school. And, how the Montana Eighth Legislative Assembly gave the school its first name change on Feb. 25, 1903.

The documentation of the school’s creation said the “Purpose of the college is to fit young people for teaching, especially in order to provide the public schools of Montana with teachers properly equipped both with instruction and with professional training.”

The 1912 yearbook had a couple of pages of news clips, some that pertained to MSNC and others that were just news clips. One of the more interesting ones was one about a MSNC graduate who was named editor of the New York Tribune.

The 1913 faculty included one professor who’s legacy continues on our campus to this day. Robert Clark, was a professor of biology and psychology and who would go on to serve as a MSNC president and have a residence hall named for him. Clark Hall now houses the Montana Youth Challenge Program.

Another Montana Western building namesake is remembered today. After leaving the Montana State Normal College, he had a a hall of fame basketball coaching career. The Straugh Gymnasium is named for hime. He had glory at MSNC as a tennis story. As a student, he won a mixed double tennis championship with Frances Bovee.

Early Yearbooks also featured pages featuring candid photographs of students, staff and activities. Along with the photos were jokes, humorous limericks, humorous poems and humorous short stories. I use the term humorous loosely. I am guessing that a bad joke then is a bad joke now. One one-liner that might still mean something to students was from the 1925 Chinook: “We miss breakfast on Sundays not because we like to eat less, but because we like to sleep more!”

We’ll close this chapter of tidbits with a bit of advertising. One thing that hasn’t changed over all the years is being a well-dressed college student. And, there was and still is someone trying to win their business. No social media, glossy magazines or television ads featuring celebrities. The play back in the early days of MSNC was simplicity. Eliels, a long time Dillon, Mont. clothing store offered a bit of fashion advice for the local college student with a simple ad in the yearbook. The script is a bit aged, but the message is still the same.