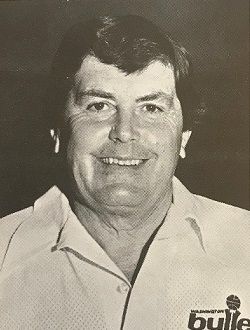 Established by the Keltz Family

Awarded by the men’s basketball coach.

Casey was born Sept. 10, 1932, in Livingston to Clyde W. and Donnabelle Harness Keltz. The family moved to Belgrade, where Keltz attended local schools and graduated from Belgrade High School in 1950. After graduation, he attended Montana State University, where he played both football and basketball as a freshman, which at that time was a very uncommon thing. Casey then enlisted in the United States Coast Guard Reserve and served for two years. His athletic prowess was proven again as he was named the MVP of the service league he played in. His Coast Guard service ended with a back injury from a ship accident. Upon his return to Montana, he continued his collegiate career at Western Montana College under coach Bill Straugh. During his Bulldog career, he was a three-time all-conference selection. He graduated from Western in 1957 and began his teaching and coaching career at Broadwater High School in Townsend. His first season as a head coach was a sneak preview of what would be a long and successful coaching career. He returned to Dillon and Western Montana College in 1965 as the Bulldogs head football coach. Two years later, Western captured the Frontier Conference title. In 1968 he took over the Bulldog basketball program from his coaching mentor Bill Straugh, and in his first season guided the Bulldogs to the conference and district championship and a berth at the NAIA national tournament. He retired in 1996 after 28 years and 409 career victories. He also coached the Bulldog track team to numerous conference and district titles, including six of seven titles in the 1970s. Casey is a member of the Montana Coaches Hall of Fame, Montana Western Athletic Hall of Fame and the NAIA Basketball Coaches Hall of Fame. Casey also holds the distinction of being one of the few coaches to be named Frontier Conference Coach of the Year in three different sports. That same year he retired, under the direction of Western Montana Foundation Director Tom Yahraes, the arena at the Montana Western physical education complex was officially named the Keltz Arena. Casey was a great coach, but he was also a very fine businessman, and like his coaching career, was very successful there, too. Casey introduced pizza to Dillon in the ’70s because he saw a need. In the early ’70s, he purchased the Lion’s Den with two partners and today, it remains a popular gathering place for the residents and sports fans of southwest Montana. Donald F. “Casey” Keltz passed away March 4, 2012. When he left this world, he was wearing his red and white Western Montana College sweater.