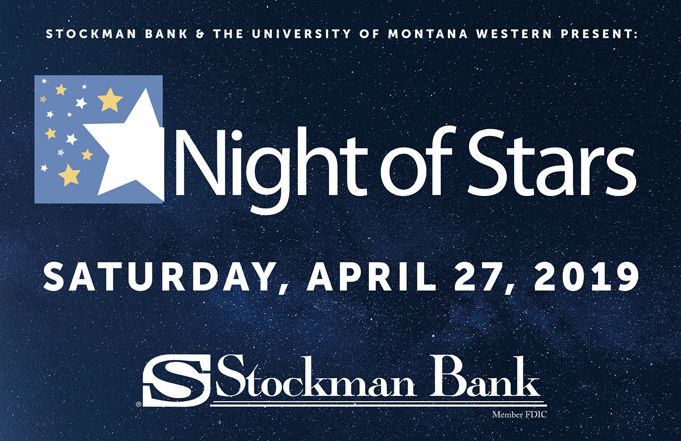 The schedule of events includes the Education Hall of Fame Induction Ceremony at 6:00 p.m. in the Beier Auditorium, followed by drinks and hors d’ourves at 8:00 p.m. in the Lewis and Clark room, located in Mathews Hall. Proceeds support Montana Western’s Education Department student scholarships.

This year’s Night of Stars will induct four Montana Western alumni into the Education Hall of Fame in recognition of their phenomenal dedication to education and will honor ten current education students as Outstanding Teacher Candidates.

Roxanne Engellant, Director of the University of Montana Western Foundation, said “I think everyone can name one teacher who made a difference for them and we want to acknowledge and celebrate those educators who spend a lifetime making a difference for their students.”

Montana Western has also partnered with Stockman Bank to award a Take Stock in Education Scholarship for a current third-year student and a Stock your Classroom Award for one of the Outstanding Teacher Candidates.

John Wilkerson, a Dillon, Mont. native, graduated from Montana Western in 1966 with a bachelor’s degree in secondary education. Because of Wilkerson’s hard work and determination, he went on to complete his master’s in education in 1969 while teaching full time.

Wilkerson student taught at Beaverhead County High School (BCHS) in Dillon during the fall of 1965 and started his first teaching job at BCHS in the fall of 1966, where he taught on and off for 34 years. He became Assistant Principal in 1987 but returned to teach math in 1995.

From 2001-2010, Wilkerson was an adjunct math professor at Montana Western, where he was able to teach under a traditional model as well as Experience One, a unique one course at a time scheduling system. In addition, Wilkerson was a case manager for Montana Youth Challenge Academy from 2001-2018.

For 24 years Wilkerson was in a band called “The Generation Gap,” where he played for clubs, bars, wedding receptions and birthday celebrations at locations all over southwest Montana.

His long-time friend and band companion, Frank “Frog” Hull, submitted the nomination for Wilkerson. Hull stated in his nomination that he felt that “from the moment John arrived at BCHS, he started making a difference.”

Currently, Wilkerson is retired yet continues to be an active community member in Dillon.

William “Bill” Schlepp graduated with honors from Montana Western in 1975. He received his Bachelor of Science in social science and minored in physical education and health.

He was a two-year letterman in football from 1971-72, Vice-President of his sophomore class 1972-73 and junior class 1973-74 and was an overall active and outstanding student while at Montana Western.

Schlepp coached football, basketball, track and wrestling from 1975-2003, and was inducted into the Montana Coaches Association in 1999. He was given the Montana High School Association Service Citation Award in 2004 for his remarkable work and dedication to student athletics and activities.

Schlepp currently substitute teaches when possible to stay active in the education community.

Myles William Carpenter received his Bachelor of Arts in industrial arts with a minor in business education in 1973, and earned his Master of Education in 1976 from Montana Western.

Carpenter came to Montana Western as a skilled journeyman machinist. In 1962 he quickly started teaching machine shop class because he was knowledgeable of the equipment.

Carpenter still maintains and operates his family ranch which was started by his grandfather, John Carpenter, in 1882 when he acquired land through the Homestead Act. Carpenter has purchased over 20 ranches while working alongside his brother.

One of Carpenter’s proudest achievements is the decision he made to attain his degree in education. “Many of my children, grandchildren, nieces and nephews have attended and graduated from Montana Western with education degrees. We are a family that believes in teachers and knows their value. I am proud to say that I was part of that,” said Carpenter.

Jackie (Vuckovich) Fuller received her bachelor in K-12 physical education and secondary business education with an emphasis in athletic coaching and athletic training in 1984 from Montana Western. In 2015 she received her master’s degree in educational leadership from Rocky Mountain College.

After graduating from UMW, Fuller taught business education in Shelby, Mont. from 1984-88. During this time she also coached girls’ basketball, track, volleyball and was the school athletic trainer. In 1988 Fuller was named coach of the year and that same year her team won the State Volleyball Championship.

Fuller later moved to Kalispell, Mont. where she was a para-educator at Batavia Elementary School, working with students grades K-8. In 1991 Fuller taught physical education and coached volleyball and track while working as the athletic trainer at Whitefish High School. Her volleyball team won five state championships, Fuller was named coach of the year five times, and was soon inducted into the Montana Coaches Association Hall of Fame.

Jackie met and married her husband, Ken Fuller, while attending Montana Western. Her sons Colin and Connor Fuller both graduated from UMW with education degrees, continuing the family teaching and coaching legacy.

For additional information or to purchase tickets to Night of Stars, please visit www.umwfoundation.org or call 406-683-7306. Ticket prices are $20 for a single, $30 for a couple and $5 for UMW students.