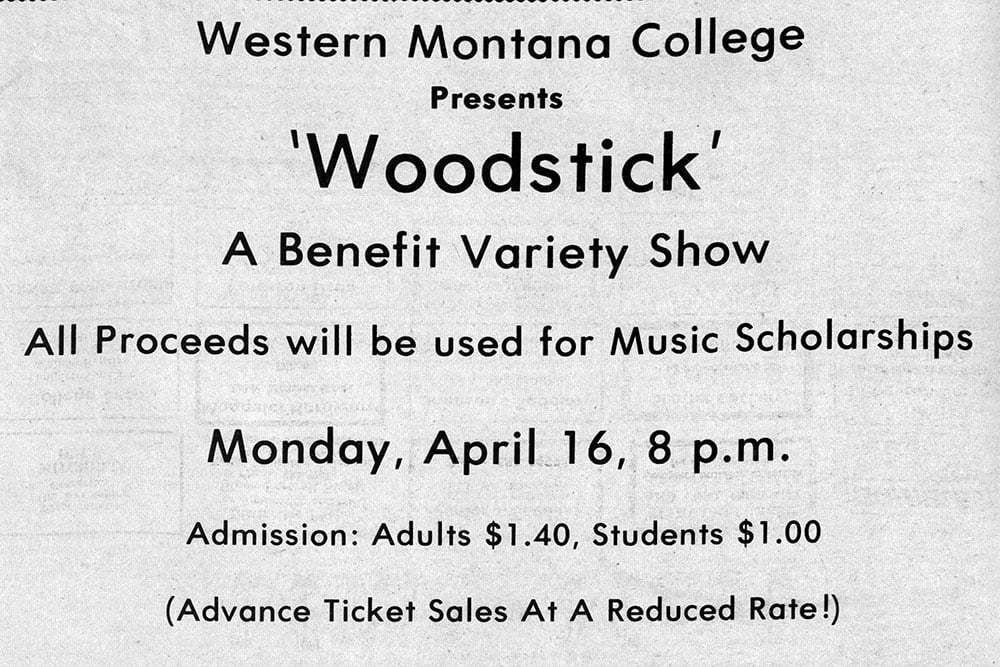 Both events employ a clever little play on words. Vodvil was a very popular campus and Dillon community fund-raising event that begin in the 1920’s and continued through the 1950’s, but, that is another story.

Woodstick made its debut on Monday, April 16, 1973 at 8 p.m. in the WMC auditorium. Woodstick, a fundraising event that was the brainchild of the music faculty and students to raise money for music scholarships.

How good was the talent being assembled for Woodstick I? How good was best described by an unknown WMC professor who, after watching a preview performance, said, “Those people are absolutely fantastic!”

The Woodstick I talent lineup featured 18 acts from both the WMC campus and Dillon community. Based on reviews in both the Dillon Tribune-Examiner and the Wescolite (WMC student newspaper), Woodstick was not only a sell-out but a bona fide hit.

The Tribune-Examiner reporter wrote “Woodstick spotlighted community and college talent, young and old, in a program which stirred the jammed auditorium to frequent bursts of tumultuous applause.”

Other performances in the debut Woodstick included “Dueling Banjo and Guitar” by Molly Jakovac and Dixie Tyler; the Western Chorale performing Aaron Copeland’s “the Younger Generation, the Black Butte Pipe and Drum Band, the Golden Nuggets Square Dancing Club, the Jugheads, a Hillbilly Band and the Tylers.

A musical satire from “the End of the World” was presented by music professors Sam Davis, Leon Dillingham and Larry Anderson. Cox, Hagerman and Love from Camden performed their own number. There were other entertaining vocal performances both solo and group. The WMC Spurs’ “Fascinating Ladies” was another crowd favorite.

The Wescolite writer’s review of the first Woodstick was simple and straight forward. “Woodstick can truly be termed a success in talent, workmanship and cooperation.”

The Dillon Tribune-Examiner’s writer was in total agreement to his Wescolite colleague. “Based on its fabulous success, Woodstick is a sure bet to become one of this areas outstanding entertainment features.”

Woodstick II, directed by WMC music students Mary Nelson and Linda Rosin, followed on Nov. 19, 1973. Western grad and Beaverhead County High School teacher Frank ‘Frog’ Hull was the master of ceremonies. Hull was described by a Wescolite writer as one of Montana’s most-skilled artists in the musical and speaking realms.

One of the crowd favorites of Woodstick II was the Generation Gap’s arrangements of “Delta Dawn” and “Tie a Yellow Ribbon Around the Old Oak Tree.” The trio of Frank Hull, Dick Sietsema and John Wilkerson literally “brought the house down with their performance.”

The Wescolite had a one-word review for Woodstick II. Borrowing from a Disney classic, Woodstick II was described as Supercalifragilistic!

The Dillon Tribune-Examiner described Woodstick II this way, “Woodstick II has again solidified its stature as a superb town-grown venture. And, from all observations, it is definitely hear to stay.”

Sad to say, Woodstick didn’t stay that long. Woodstick turned out to be a strictly 1970’s event. Wednesday, May 2, 1979 was the date of the final Woodstick performance.

In the May 22, 1980 Wescolite, an article reported that the music club had postponed Woodstick. Originally scheduled for May 20, the event was now tentatively scheduled for the fall quarter. The reason for the postponement, simple, a lack of applications to participate.

Woodstick may have ended in 1979 and other campus variety shows appeared over the years. But for the WMC students of the 1970’s, there was something special about Woodstick. Thanks for the memories!