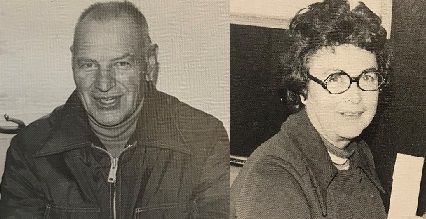 Awarded to one men’s and one women’s basketball athlete.

Bill was born in White Sulphur Springs to ranch parents Charles and Ruby Straugh, he grew up on the ranch and attended country schools until entering White Sulphur Springs High School, where he graduated with the class of 1928. After graduation from high school, Bill was a ranch hand with a dream to go to college. In the fall of 1931 he had saved enough to enroll at the Montana State Normal in Dillon. Graduating with honors in 1935, he accepted a position as mathematics teacher and head basketball coach at Glasgow High School. In 1939 Bill purchased a new brown Hudson for $830 and Virginia Flynn of Saco became his wife on July 1, 1939. The year 1940 was a dream come true in the life of William T. Straugh. In July he received a telegram from Sheldon E. Davis, president of Montana State Normal College, offering him the position of instructor of mathematics and coach. He signed on to teach a full academic load and coached football, basketball, baseball, track, tennis and swimming. Bill and Virginia moved to Dillon in August 1940 and set up housekeeping in the third floor of the old Curtis Hospital apartments on South Washington Street. A break in coaching came in 1943 when Bill entered the Navy as a lieutenant junior grade. After three years service, he returned to Western. Retiring from coaching in 1968, Straugh had amassed a record of 362 basketball wins, 229 losses, nine league championships, five appearances at the national finals, 10 track titles, two football championships and one baseball championship. In 1968 Bill gave up the coaching to become athletic director. In 1976 he retired from Western. The next eight years he was a surveyor for the U.S. Forest Service and spent off-days and hours building his cabin at Elkhorn. In 1973 Straugh was inducted into the NAIA Basketball Hall of Fame, in 1981 the Western Montana College Hall of Fame, and in 1983 the Montana Coaches Hall of Fame. Coach Bill Straugh, 92, passed on February 7, 2003. Virginia was born in Great Falls, Mont., on Feb. 28, 1919, to William W. and Wanda (Voegel) Flynn, immigrants from Ireland and Germany. Virginia began school in Great Falls but moved to Saco with her mother and sister after the death of her father. Virginia worked summers and vacations as a cashier at a local theater to earn tuition to attend Northern Montana College after graduating from Saco High School in 1935. Virginia worked at Fort Peck as a theater cashier and then as secretary during the construction of the dam. It was here that she met and married William T. Straugh on July 1, 1939. In 1969, Virginia took a "temporary" job working as the president's secretary at UMW, a position she retired from in 1982. She was a safe haven for faculty, staff, and students who were not sure how things worked. Virginia Elizabeth Straugh, 95, passed away in Dillon, Mont., on Feb. 15, 2015