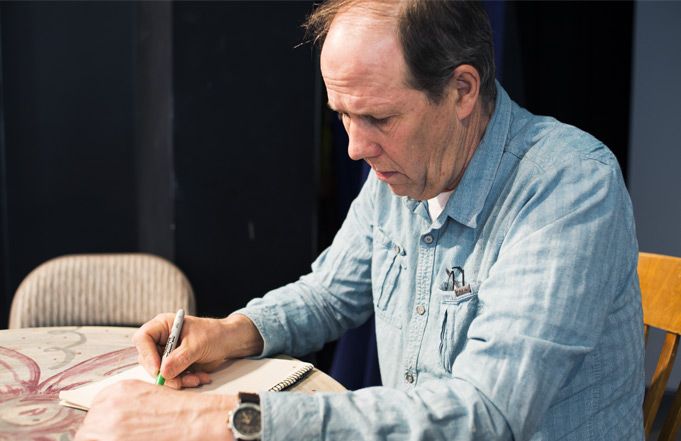 With performances held Feb. 22-28, 2018 on the Montana Western campus, two Pulitzer Prize and Tony Award-winning plays, “Proof” and “Doubt,” are presented by the University of Montana Western Fine Arts Department, as part of the 2017-18 Bank of Commerce Performing Arts Series. The casts and crews feature guest and student actors, faculty members and student directors.

Rob Holter’s first acting role was in a church pageant his first-grade year at St. James Episcopal Church in Bozeman, Mont. Starting in the summer between sixth and seventh grade, he audited technical theater courses from Signa Anderson (James) at Montana State University so he could be hired to be a member of the stage crew at the Willson Auditorium.

During this time, he made several lifelong friends who “could not understand why a ‘shrimp’ was taking college level theater courses for no grade.” After graduation from MSU, Holter went to school and worked in the Seattle area for three years, and then moved to Los Angeles, Calif.

Holter has earned screen credits in several full length and short films, and PBS shows including “Meet Christopher Parkening,” “Amazing Grace and Chuck,” and most recently the series “Thrive.” He will also appear in the upcoming independent film “Useless,” a story about an orphan who wants to become a barrel racer filmed near Kalispell, Mont.

Mr. Holter received a Master’s in Theater from the University of Montana in 2000, and an Associate’s in Energy Technology in 2014. He has taught high school theater classes for 29 years. Currently on sabbatical from teaching at Helena High School, he jumped at the opportunity to play Robert in “Proof” and teach at Montana Western.

“Proof” by David Auburn, follows the life of Catherine, a loyal daughter and her brilliant, but less-than-sane, mathematician father. Directed by Montana Western faculty member Larry Brazill, “Proof” is a captivating story of romance, loyalty, and mystery.

“It’s one of those roles you dream about playing,” said Holter. “I was so excited to receive an invitation from Larry Brazill to be in the production of “Proof” and have the opportunity to teach at Montana Western.”

“Doubt: A Parable” by John Patrick Shanley, is directed by Montana Western student Katie Bumgarner. Emotional and boundary-pushing, this play illustrates the power struggle between genders, race, and religion.

A 125th Founders Day Celebration and Bank of Commerce Performing Arts Social will be held on Thursday, Feb. 22, 2018 at 5:30 pm on the first floor of Main Hall for the community and audience of “Proof” to enjoy refreshments, hors d’oeuvres and conversation before the show begins that night at 7:30 pm. The social is hosted by Montana Western Alumni and Friends and the University of Montana Western Foundation.