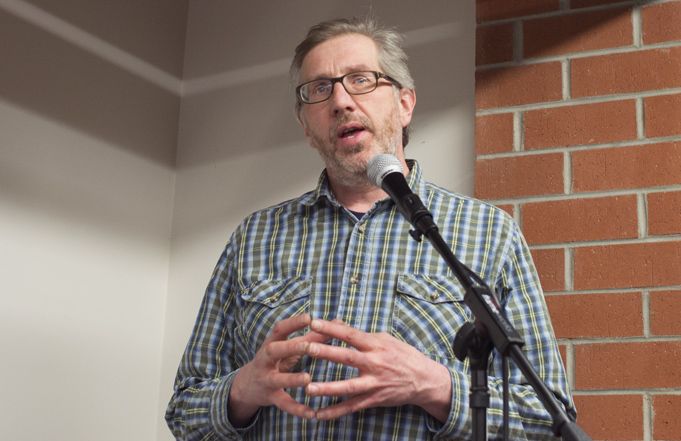 “Dances with Words” is produced by English Professor Alan Weltzien. The series, free and open to the public, provides the community with a unique opportunity to listen to writers reading their own works, including Montana Western student writers.

“Mommy” and “Nine Lives” are imitation poems based on Sylvia Plath’s “Daddy” and “Lady Lazarus” respectively. Nelson captured Plath’s spirit, funneling the poet’s desperate energy to conjure her own confessions.

Her piece “Nintendo Night” is a harrowing meditation on loss, despite its friendly title.

Davis was a finalist for the 2016 Katherine Anne Porter Prize in Short Fiction for “West of Love.” He’s won writing fellowships from the Ragdale Foundation, The Millay Colony for the Arts, and the Vermont Studio Center.

The official summary for “West of Love,” states: “Staring down heartbreak and regret, Stewart Simmons flees a haunted Philadelphia for the beauty of the West. In a raw, yet lyrical voice that gives life to the urgency and appetites of youth, “West of Love” takes place in a time before the internet, before cell phones, before technology changed the ways we live and love. And as an older Stewart looks candidly back at his younger self, a picture of the human heart emerges–one that offers a testament to how we heal, how we go on.”

Davis read one story set on each side of the continent.

“West Philly” takes place in 1992; the fall of the Berlin wall is the backdrop for a protagonist facing similar destruction in his personal life, tearing apart his present to make way for a bigger future.

The character, soon to move to Montana, reminisces on his days in the place where he grew up. In one striking section, he focuses on his deceased grandfather, a man with “thighs like small countries” and “the ridiculous cigar-shaped canister” in which he was buried.

“Missoula” catches up with the same character three years after he’s transplanted west. The adventure features infidelity, broken bones, and escaped pythons, all filtered through a haze that propels the characters forward in rushing rapids of comic agony.

The “Dances with Words” series will continue on April 19, 2018 with Butte’s David Abrams reading from the recently published “Brave Deeds.” For upcoming readings, please visit our Events page.