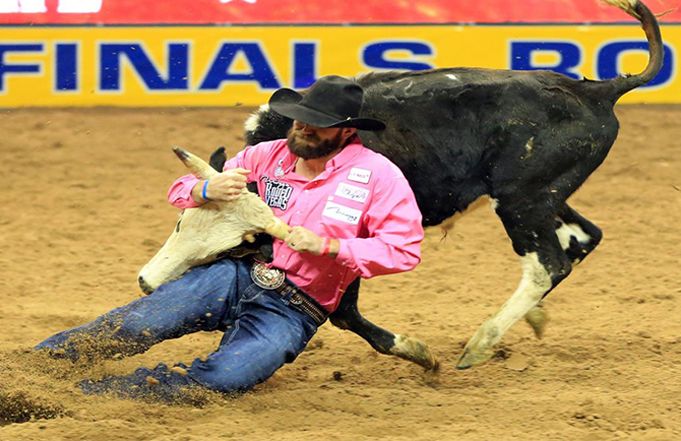 Many members of Chambers’ family graduated from UMW so it was no surprise when he decided to attend Montana Western. The flexibility of the block system at UMW allowed Chambers to play basketball and participate in rodeo while completing his degree. Chambers was the first person to compete in both the NAIA National basketball tournament and the Collage National Finals rodeo in the same year.

“I loved the block scheduling program. UMW was a great environment for me and what I wanted to do,” stated Chambers.

Chambers notes that the small class sizes and community support surrounding the campus helped make his college career a success.

In March 2018, Chambers placed second in the steer wrestling at the Ram National Circuit Finals in Florida. His winnings afforded him the opportunity to launch his full time rodeo career. His goal was to place consistently at rodeos across the U.S. and Canada in order to make it to his first National Finals Rodeo held every December in Las Vegas, Nevada.

Chambers competed in 84 rodeos throughout the U.S. and Canada during the 2018 rodeo season.

The NFR can be thought of as the Super Bowl of professional rodeo. Rodeo Contestants compete at sanctioned rodeos throughout the nation, collecting winnings. The top 15 contestants who won the most money over the year advanced to the NFR held Dec. 6-15, 2018. Chambers, who competed in 84 rodeos over the season, entered the NFR number eight in the world with year-end earnings totaling $81,175.35.

Professional rodeo is expensive and Chambers is the first to admit it.

“I didn’t have $81,000 in my pocket when I made it to Vegas. I paid more than $14,000 in entry fees alone this past year. The Finals is where you make your money and I took a big chance hoping it would all work out,” Chambers explained.

The NFR is held on the campus of the University of Nevada Las Vegas in the iconic Thomas and Mack Center which is temporarily converted from a basketball court to an arena. The 10 day event has become a symbol of rodeo culture and Chambers got to be a part of making history. A gallant grand entry starts off the rodeo every night where the contestants gallop into the arena on horses.

“When I ran through that tunnel the first night and saw everyone cheering for me, seeing my family in the stands, that was when I realized I did it,” Chambers said.

When Chambers nodded for his steer at the first go-round of the finals, a surge of adrenaline hit him. His mind however, stayed focused with only one thought: get to the horns.

In the steer wrestling event, contestants are required to launch a horse from a stand-still into a full on sprint in order to catch up to a steer that has a head-start. They then jump off their horse and wrestle the steer to the ground. If they want to place in a go-round at the finals, all of this must often be done in under 4.5 seconds. This event is not for the small or faint of heart. Chambers is neither, standing 6’ 5” and tipping the scale at 240 pounds.

Chambers placed in five out of the ten go-rounds in Vegas ending up second in the average. All in all, he pocketed over $135,000 at the coveted event, enough to earn him the title of reserve world champion steer wrestler.

After returning to Butte, Mont. where he currently resides, it’s back to business as usual. When he isn’t rodeoing, Chambers helps run a detection business with contraband sniffing dogs. He and his horse will take a short break around the holidays but then it’s back to the rodeo trail with the goal of making another finals.

“My dream came true and now it is a consistent goal,” Chambers stated.

To learn more about Montana Western and Experience One, please visit the UMW website.