An Array of Authors Share Works at Dances with Words Series 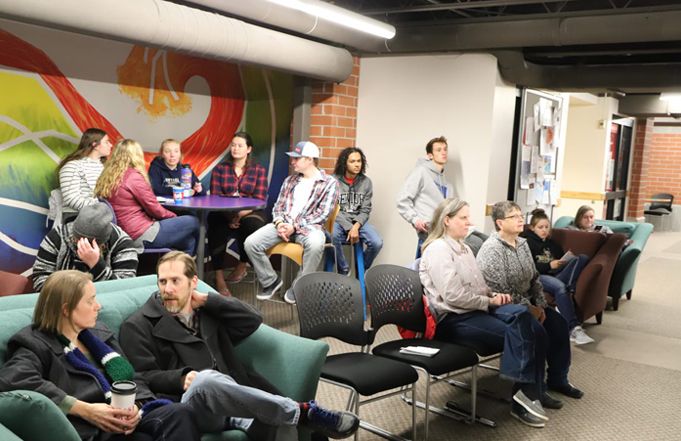 Cara Chamberlain and Bernard Quetchenbach read poetry and nonfiction works in October. Amy Pearson reflected on her time spent as a fire lookout while reciting original poems at the November reading and Doug Ammons shared research behind his nonfiction book to conclude the series in December.

Chamberlain, from Billings, Mont., read from her collection of poems titled “The Divine Botany.” She opened the event with “Middling,” a very raw poem inspired by a song called “The No Blues Blues.”

“The song is about how hard it is not to have any real thing to complain about. So just being middle-of-the-road can be a cause for the blues,” explained Chamberlain, as she described the song that greatly influenced that particular piece.

Quetchenback, a professor at Montana State University-Billings, recited two poems from the “Bunch Grass Motel” sequence, which was a collection by Randall Gloege, an author and close friend of both Quetchenback and Chamberlain, who has since passed.

Quetchenbach also read from his own essay collection “Accidental Gravity.” He shared engaging works titled “A Good Bear” and “The Music of Circumstance.”

The Series continued with Pearson reading from her book “100 Days of Solitude.” The book of poems documents her time spent on Jumbo Mountain in the Bob Marshall Wilderness during one of the biggest fire seasons in decades.

Pearson brought her solitary experiences to life through her readings, enlightening the audience with a perspective about humanity.

“All we really need is a little bit of food, a little bit of water, a place to lay our heads at night, and a view over the beautiful and vast horizon that is always there if we dare to take a look,” Pearson stated during her presentation.

Doug Ammons, from Missoula, Mont., exposed listeners to the history and research behind his award winning nonfiction book “A Darkness Lit by Heroes.”

Ammons’ book takes a look at the great Speculator Mine fire which has been documented as the worst hard rock mining disaster in American history. The tragedy occurred in Butte, Mont. in June 1917, ultimately claiming the lives of 168 hard working men.

During his appearance, Ammons described the hardships and experiences men were facing in the copper mines of Butte at the turn of the century. He wanted to put the audience in the situation, saying “storytelling is how we travel across time.”

The “Dances with Words” series is produced by UMW English Professor Alan Weltzien with the next performance taking place on Jan. 24, 2019. All productions begin at 7:30 p.m. at The Cup located below the Library on UMW’s campus. These events are free and open to the public.

Featured authors’ books at “Dances with Words” are made available for purchase by The Bookstore and Deb Sporich.

For more information about the “Dances with Words” events, please contact Alan Weltzien by email at alan.weltzien@umwestern.edu or call 406-683-7431.