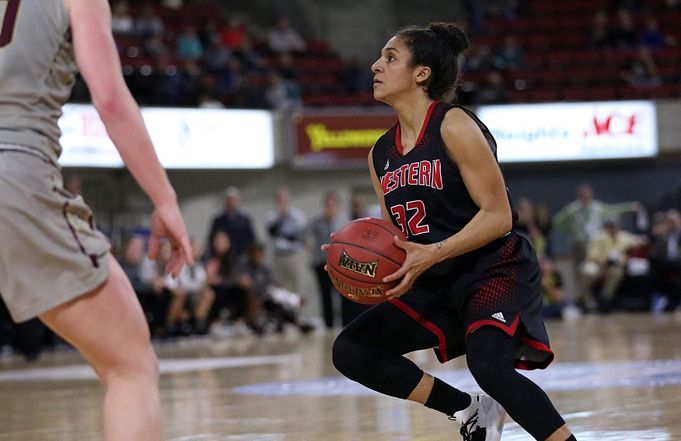 “We were dead in the water,” head coach Lindsay Woolley said.

The Bulldogs almost magically chipped away as FHU made shot free-throws down the stretch. 2.1 seconds was all that remained and the Bulldogs were down 66-63.

Shannon Worster found King, who hit a step back corner trey at the buzzer, to send the game into overtime.

The shot heard round Montana sent the partisan crowd into a frenzy, nearly taking the roof off the Metra.

The Bulldogs carried that momentum into the extra session. Cierra Lamey took the opening tip and converted a three-point play and the Bulldogs never looked back.

“To get the game to overtime is one thing,” Woolley said, “But then to execute like they did in overtime was unreal.”

The Bulldogs led for a majority of the game, before a sluggish third quarter allowed FHU to climb back and take the lead. The inside presence of FHU’s Haylee Croom (32 points) seemed to be unstoppable, but the stellar defense by UMW’s Britt Cooper, Darby Schye and Mesa King contained the threat late and in overtime. The Lions couldn’t get shots to fall as the Bulldogs pulled away to head to their first national championship game.

“We’re all so proud of these phenomenal student-athletes. Our Bulldogs are our university’s team, but they are also Montana’s team, cheered on all across the state. These young women play with incredible intelligence and heart. Thank you to each of them for representing Montana Western so well,” said Beth Weatherby, Chancellor of Montana Western.

The Bulldogs will play three-seed Oklahoma City tonight for the NAIA National Championship at 7 p.m.

Montana Western Residence Life will be live-streaming the game in the STC Great Room.

The game will also be broadcast on KDBM 1490 and on the NAIA network.