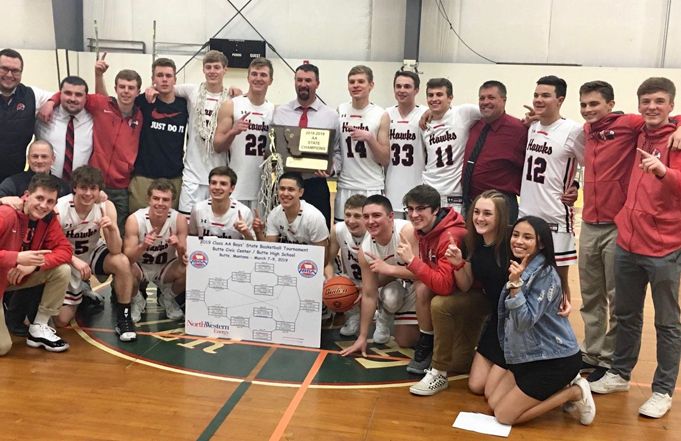 Holmquist graduated from UMW in 2001 with degrees in business education and health enhancement education. While at UMW, Holmquist played basketball under Coach Mark Durham. He notes that winning the Frontier Conference Championship his sophomore year is one of his favorite memories as a student athlete.

Holmquist knew in high school that he wanted to teach and coach but his time at UMW really helped solidify that goal.

“My time at Western had a huge impact on helping me prepare for my coaching career. The professors and coaches helped mold the way I do things as a teacher and a coach,” said Holmquist.

Holmquist just wrapped up his 11th year as the Head Boy’s Basketball Coach at Bozeman High School. The Hawks have advanced to the state championships five times under Holmquist, winning the coveted title in 2011 and repeating the victory again this year by edging out Missoula Hellgate 56-54.

“My most enjoyable memories from being able to win a state championship, was watching the people I care about, my players, my coaching staff and my family celebrate and enjoy it. It is just so gratifying to see how much it means to all of them,” Holmquist said.

Jim Sterger, who is originally from Anaconda, Mont., graduated from Montana Western with a degree in social science broadfield. He too played basketball for the Bulldogs from 1990-1993 where Sterger was coached by Casey Keltz.

“I learned a lot from Coach Keltz. He produced a lot of Montana high school and college coaches that have been very successful,” Sterger stated.

Since graduating from UMW, Sterger has spent 26 seasons as a coach. The last seven years have found him as the Head Boy’s Basketball Coach at Billings Central High School. Out of those seven years, Sterger and his team have played for the state championship five times finally winning in 2019, marking Sterger’s first state championship win. The Rams beat the Hardin High School Bulldogs 62-44.

“They are all leaders that have bright futures ahead of them. Hopefully basketball and their experiences in our program will help them along the way,” Sterger said about his championship team.

Sterger explained that to him, coaching has little to do with winning or losing. He takes great pride in the relationships he has been able to cultivate over his tenure as a head coach saying, “Some of my former players drove many miles just to watch us play in the state championship game. That means more to me than any trophy or accolade.”

To learn more about Montana Western or to schedule a visit, please call 877-683-7331 or visit www.umwestern.edu.