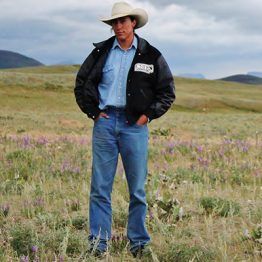 Hall graduated in 2016 from the University of Montana Western with a degree in Natural Horsemanship and Business Administration. During his time at UMW, Hall qualified for the College National Finals Rodeo and has since become a regular name on the Montana rodeo circuit.

BROWNING — The horse holds an important place in Blackfeet culture.

And horses are front and center in the life of Browning bronc rider Dougie Hall – whose Blackfeet name translates to “Crazy After Horses”.

Whether he’s riding horses or raising horses, Hall finds peace in the animals.

“I’ve been around horses my whole life. Growing up when I was small, my dad and uncle had an Indian relay team and so I was an Indian relay brat growing up,” said the 26-year-old. “We traveled to every fair in Montana and I would live off of funnel cakes. My life was sugar and fast horses.”

Hall has turned spending time with horses into a labor of love. He started bronc riding in high school, qualified for the College National Finals at Montana Western and has since become one of the most popular cowboys on the Montana circuit.

Hall is hard to miss. His distinctive braid whips around the arena as the horse bucks underneath him. And when the eight seconds are up, the cowboy has earned the nickname “Dancin'” Dougie Hall.

After every successful ride, he lets out a war whoop and does his signature “Indian Dance” to the delight of crowds around Montana.

“Some people probably think I’m doing it to show off, but I’m just having fun. That’s why I started doing it in the first place,” Hall explained. “Bronc riding didn’t click with me at first, so when I first figured out how to ride broncs, I’d jump off and I’d be so happy. I just couldn’t stop my feet from moving.”

His eyes lit up.

“And you make people smile and laugh and that’s a good medicine. Probably the best medicine there is,” he said.

Hall rides with joy in his heart, but he has experienced his share of pain. And he doesn’t shy away from telling his story.

“See, in my family there’s there’s a lot of problems with addiction, alcoholism,” Hall said. “When I was a little kid, I saw the effects of alcoholism and I never saw anything good come from it.”

Tears began to well in his eyes.

“I’ve had a lot of family killed alcohol related, too many people. And so growing up my mom (Susan Hall) was a registered nurse and she didn’t drink. And when I was a little kid, I remember she made me promise her that I would never touch a drop alcohol in my life. And I promised her I wouldn’t,” Hall said.

Even though the Hall family abstained from alcohol, the effects of alcohol found them on June 5, 2007.

Dougie was 14 at the time and he remembers every minute detail of that night to this day.

“I remember the day it happened, we had a good dinner and it was just a perfect evening, just a nice evening like this,” Hall recalled from his home in the picturesque Rocky Mountain front. “And we had dinner and we were smiling and laughing. I was getting in trouble because I was teasing my sister and just being a little brother.”

He paused before continuing: “We start for home and we’re coming towards Browning on Highway 2. And my mom’s laughing and singing to the radio, just enjoying life. I even remember the song she was singing. And all of a sudden, my sister I remember hearing her yell, ‘No’. And our truck swerved. So I peek around the front seat and I see a pair of headlights coming at us, and they’re close.”

Hall says he remembers a million thoughts running through his head in that moment.

“There was nothing I could do,” he said. “That’s the most helpless I’ve ever felt.”

He tucked himself behind his father’s seat and braced for impact. The crash was violent. Hall blacked out for a few moments.

“I remember coming to and hearing the hissing of the engines,” he said. “And I’m trying to get my bearings and I finally realize what had happened.”

Aside from internal bruising, Hall was unharmed. But he gasped when he looked at his family.

“I looked in the front seat and I see my dad, my older sister and my mother all laying over airbags and — I’ll never forget this — they were all blowing bubbles in their own blood on them airbags,” he said. “I just started screaming at them, ‘I love you guys. I love you,’ just telling them all that I loved them. I was most concerned about my mom for some reason. It’s almost like I knew something was wrong.”

The driver of the other vehicle was drunk. The Hall family was flown to Seattle with severe injuries. Doug’s father Cliff suffered a compound leg fracture, and his sister would eventually recover.

But his mother, Susan, was on life support. Nurses told Hall that her injuries were not survivable.

“I didn’t know what to do. And so I walked up to her and told her, ‘Mom, I love you very much and you’re the best mother in the whole world. And thank you for being my mom.’ And I just kept telling her that I loved her,” Hall said. “And I got stern with her. I raised my voice and said, ‘But one thing I’m not going to tell you is good bye, because there’s no such thing. I love you. I’ll see you later.'”

Dougie kissed his mother. Then her spirit left her body.

Not saying goodbye to his mother was prophetic. She lives on in Dougie’s heart and guides him every day, at every rodeo and on every bronc ride.

Including his first-ever PRCA win earlier this year in Kalispell.

“I’m 26 now and I’ve been riding broncs since I was 16,” he said. “For some people, bronc riding clicks just like that. Well, I wasn’t one of those guys, I got throttled for a long time, but it’s just something I love to do. I was very passionate about it and that was, it was always fun for me. But I had never won a rodeo before, high school, college or pro. I had placed in plenty.”

“I remember getting on that horse and it was just almost like the stars just aligned,” Hall recalled. “And I remember just being in time with that horse and just, it just flashed into my mind like, ‘It’s really happening.'”

A 77-point ride earned Hall a check for $921, a modest sum by PRCA standards but symbolic of so much more for Hall.

“I could feel my mom. She was there,” he said. “That was one of the best memories I’ll ever have”

Doug’s resilience and attitude have inspired a lot of people, including his best friend Will Shirley.

They met rodeoing in high school. Shirley’s property had been robbed in Browning when he was 10 years old, and he had developed a distrust for Native Americans.

“It was definitely burned in my brain, you know, kind of a vulnerable age,” Shirley said. “I was set in my ways and my parents did everything they really could to talk me out of it. But I assumed all Indians were thieves.”

But Doug was different.

“He’s got a pretty just bright personality and when we met, I didn’t even talk to anyone else there at the rodeo grounds. He just came up and stuck his hand out and said, ‘Hi, I’m Dougie Hall,'” Shirley said. “That night I ended up getting bucked off and I broke my wrist and I was kind of slow coming back to the chutes and Doug comes around and he’s right in my face like, ‘Are you all right? You all right?’ And it kind of caught me off guard.”

Hall and Shirley have been inseparable ever since. And it’s that bond and attitude that led Shirley to nominate Hall for the Rocky Heckman Perserverance, Character and Hope Award named after the late rodeo legend and youth advocate who lost his life after a long battle with brain cancer in 2017.

“(Hall) is known throughout the rodeo world just because of his personality and how positive he is,” Shirley said. “For all the negative things that have happened to Doug and the way he treats people and his positive outlook on life is just kind of nothing short of amazing. And it’s definitely changed my life. It’s made me a better person.”

The Heckman family, Shirley, and the Hall family surprised Dougie with the belt buckle during the final performance of the Big Sky Pro Rodeo Roundup. He was presented with the award in front of thousands of roaring fans in Great Falls.

And yes, he obliged them with his signature dance moves.

“That left me speechless, because Rocky has done a lot for rodeo. He did a lot for kids in high school rodeo. Every time I saw Rocky, it was at an event for kids. He was always very good to me and treated me like one of his own, a great guy,” Hall said. “And to have an award in honor of someone like him, that was the one of the biggest honors I’ve ever gotten. It made me tear up, made me feel all kinds of good things and I was just very, very grateful.”

Currently Hall is nursing an injury that has kept him from riding in rodeos for much pf the summer. But once he’s healed he plans to hit the circuit next year and qualify for the Montana Circuit Finals.

But that’s just one goal of many that Hall has set for himself. He wants to make a name for himself on two fronts.

“My ultimate goal is to be the first guy from (Browning) to qualify for the NFR and ride there and also have a bucking horse that I raised there,” he said. “That’s my ultimate goal and that’s what makes me happy, is going after that.”

But even if Hall never wins one more rodeo, his legacy will be how he treats people and the lives he touches along the way. And that’s more valuable than any championship or belt buckle.

“When somebody smiles or laughs, they seem to put down the baggage of whatever they’re carrying,” he said “People are just like horses. They’re afraid of whatever is different and the unknown. But I guess it feels good to be looked at as just a human being. That’s just how I was raised.”

He smiled one last time.

“People are people,” he said.