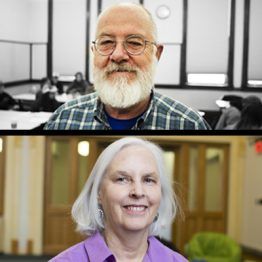 Dr. Norris-Tull earned her Ph.D. at the University of Texas. After serving at institutions in Texas, Arkansas and Alaska, she joined the Education Department at UMW in 2004 as a professor. She served as chair of the Department from 2009-2011 and Spring of 2016, and later served as co-chair during 2016-2017. Additionally, Dr. Norris-Tull was the Accreditation Coordinator for the UMW Department of Education from 2005- 2018.

Her work might best be summed up by her award as the CASE/Carnegie Foundation 2010 Montana Professor of the Year Award. This award recognized Dr. Norris-Tull’s exceptional contributions to the Education Department, Montana Western, the state of Montana, and beyond.

Dr. Krank earned his Ph.D. in psychological foundations of learning at the University of Wyoming. Prior to his time at the University of Montana Western, Dr. Krank served as an elementary and middle school principal in Wyoming and acting superintendent and elementary principal at the Omaha Indian Reservation in Nebraska. Because of his leadership experience, Dr. Krank assisted with a number of administrative responsibilities within Academic Support Services during the first part of his career at UMW.

Dr. Krank’s greatest achievement at Montana Western was being in the forefront of bringing Experience One – one course at a time block scheduling to the campus. A member of a select faculty vanguard, he fought courageously to persuade concerned faculty, administrators, townspeople, and individuals at the Office of the Commissioner of Higher Education (OCHE), that Experience One was a superior scheduling model that would save the university and pedagogically benefit students.

Dr. Krank accomplished this gracefully and with hard data. Using quantitative research, his disciplined and rigorous analysis of the Experience One Pilot Program is considered one of the most important events in the history of Experience One.

As a teacher, Dr. Krank challenged students with rigorous classes. He demanded that students think critically and communicate as scholars. He encouraged discussion and full student participation in his courses. Dr. Krank continuously improved his classes with innovations that the Experience One program allowed, and he stayed informed of the latest scholarship in his field in order to provide his students with the best education possible.

Dr. Krank has left behind an incredible legacy at Montana Western by building a foundation for vigorous and dynamic programs in History and the Social Sciences.