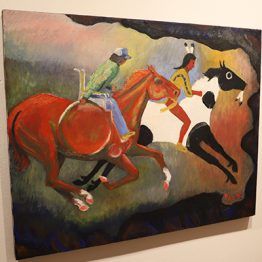 During the lecture, Sherrard explained that contemporary Native American art is often overshadowed by the historical items of the past. This gallery showcased artists from several tribes who combine contemporary techniques with culture and heritage to create strong messages about societal problems and modern Native American life.

One of the featured artists, Molly Murphy Adams, specializes in contemporary sculptural beadwork and printmaking. She was born in 1977 as a mixed-blood descendent of the Oglala, Lakota tribe and she was raised in Western Montana. Adams earned a Bachelor’s in Fine Arts from the University of Montana in 2004. Much of her work stems from the combination of traditional Native arts and modern art, illustrating the blending of culture, identity and histories.

This piece above titled “Race with the Past” was completed by Ernie Pepion in 1990. Pepion was born in Browning Mont. in 1943, and served as an infantryman in the Vietnam War. After returning from service in 1971, Ernie was in a car accident which rendered him a quadriplegic and confined him to a wheel chair. In the ensuing years, Pepion received extensive treatment at the Administration Rehabilitation Center in Long Beach, Calif.

During his stay there he met another veteran who taught him how to mix paint colors with the use of a brace. This skill encouraged him to take up painting and he attended Montana State University for formal taining. The MSU Engineering Department developed a motorized easel and paint tube wringer which enabled Pepion to work out of his studio in Bozeman. In 2005 he received the Montana Governor’s Award for Arts. In the early 1990’s, he was profiled in a Native Voices Public Television Workshop documentary titled “Ernie Pepion: The Art of Healing.”

Jason Clark grew up in a rural town at the base of the Sierra Nevada Mountains and has lived and worked in many places across the United States. He resides in Missoula, Montana as a printmaker, adjunct professor and 2-D Technician in the School of Visual and Media Arts at the University of Montana. His prints have been exhibited nationally and internationally at various universities and institutions. His work touches on Native identity, history and environmental and political issues.

Earlier in the semester, the Fine Arts Gallery showcased several outstanding artists in the community during the “Dillon Community Exhibition.” The show ran from Oct. 4 to Nov. 8.

LaVon Brillhart lightheartedly mentioned that he used to take photos of birds, but unfortunately birds would fly away, so now he takes photos of mostly wildflowers. “Sometimes my photos don’t mean anything. Just look at it and enjoy it… and if you look at it and don’t enjoy it, that is fine also. You don’t always need to know what is going on to enjoy art,” Brillhart said.

“The Mask,” is one of Mary Christopher’s favorite pieces because of the way her head is aimed, “strong like a bull,” the artist explained. She incorporated a lightening bolt on the sculpture’s forehead to signify knowledge.

“Hopefully people feel something when they look at my sculptures. There’s a spiritual being behind the unknown woman. To enjoy life for me is to work with clay by making images out of earth, specifically humans out of earth. I like to make women that have a lot going on in their thinking spheres with their eyes fierce, saying ‘I am here,'” said Christopher.