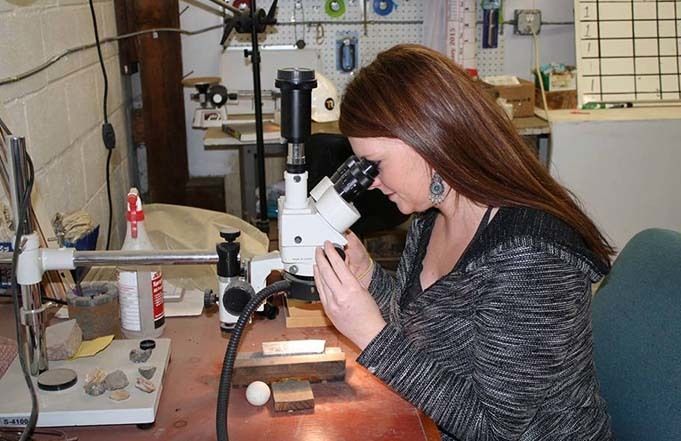 Montana Western alumna, Lacey Morrison, graduated in May 2015 with a degree in Environmental Science with an option in Geology. Originally from White Sulphur Springs, Montana, Morrison attended UMW because of the unique block scheduling program that allows students to learn one course at a time.

In 2016, Morrison was offered a position in Juneau, Alaska as an underground geologist for Coeur Mining Inc., a precious metals mining company that operates five mines located throughout North America. Here, Morrison was able to gain valuable experience before returning to Black Butte Copper in 2017.

Today, she holds the title of Senior Geologist and manages the diamond drill operation. She works closely with the Montana Department of Environmental Quality (DEQ) on permitting so the drilling is compliant with the state’s regulations. Morrison also organizes the earthworks, drill contractors, scheduling, and budgeting that goes along with the drill programs and then uses the data gathered from the operation to create 3-D geological models.

Morrison says that she “enjoys the wide spectrum of tasks that comes along with the job,” as well as the opportunities that it has provided. This included an opportunity to travel to Western Australia in 2019 to work at another Sandfire Resources mine until 2020.

Morrison has also taken the time to create other opportunities for women in the field of mining. In June 2021, she teamed up with an engineer from Stillwater, Montana to create the Women in Mining (WIM) Montana Chapter. While spending time in Western Australia, she learned about the Women in Mining organization. It was her goal to be able to take that same idea and implement it in Montana.

According to their website, WIM Montana’s mission aims to provide a support network for its members and “opportunities to acquire new personal and professional contacts by engaging with their peers across the state along with opportunities for personal development. We invite anyone interested in educating, mentoring, and developing mining professionals to thrive in their careers and change the perception of the mining industry to join us.”

“In our organization, we aim to teach people about gender diversity and inclusion in the workplace along with working to retain women within the mining workforce. In the near future we look to provide scholarship opportunities along with a mentorship program to get young women interested and educated in the mining industry,” Morrison said.

Morrison credits the hands-on experience she received while attending Montana Western for being the foundation for starting her career and path to success. She also credits the incredible instructors at UMW that mentored and guided her throughout her time in college.

“Several instructors were very influential during my time at Montana Western; Rob Thomas and Sheila Roberts had a huge part in my college career and I can’t thank them enough,” said Morrison.