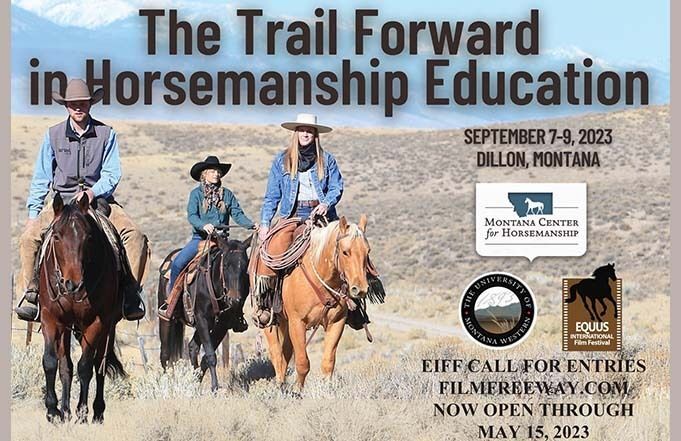 Leading trainers, educators, equestrians, ranchers, clinicians, filmmakers, equine scientists, and researchers will be among the presenters. The annual conference is open to all interested in attending, including members of the public and students of all ages.

Equus International Film Festival, featured during the conference, has opened the Call for Entries on FilmFreeway.com. Award-winning films will be featured at MCH and in the state-of-the-art Beier Auditorium on the historic campus of Montana Western during the three-day gathering.

In keeping with the MCH mission, a new film entry category has been added titled “Western Way of Life and Horsemanship,” which reflects the traditions, culture, and lifestyle of the American West built around horses and horsemanship, ranching, and the agriculture industry.

Janet Rose, MCH Coordinator of the annual conference says, “the Western way of life is recognized around the world as a cultural icon, just as horses are an American icon. Horses helped to build our country and our Montana economy, and this conference and film festival highlights and celebrates this continuing legacy.”

The Equine Studies Department at the University of Montana Western offers the nation’s only Bachelor of Science degree in Natural Horsemanship with options in management, psychology, science and instruction, and was ranked among the “Best Equestrian Colleges” by ThoughtCo.com.

The Montana Center for Horsemanship is the first and only equine center in the United States that is devoted expressly to promoting ‘Natural Horsemanship.’ With its stables, arenas, riding areas, and instructors, the center serves as the primary facility and progressive teaching resource for Montana Western’s Natural Horsemanship BS curriculum.

The MCH teaches the ‘La Cense Method,’ which was developed under William Kriegel, owner of Haras de la Cense in France. Mr. Kriegel is also co-founder of MCH, and he has been involved in Natural Horsemanship for many years. The La Cense Method is a progressive, step-by-step process that blends the best of traditional horsemanship training with the art of training and riding horses—all in a manner that works with a horse’s behavior, instincts, and personality. Taking a positive and respectful approach, the La Cense Method gradually builds trust, and frees the horses to be confident in all they are asked to perform.

For more information on conference participation and sponsorship, please contact the Montana Center for Horsemanship at 406-925-3270 or email janet.rose@williamkriegelfoundation.org.

To learn more about the University of Montana Western and degree options in Equine Studies and Natural Horsemanship, please call 877-683-7331 or visit www.umwestern.edu.