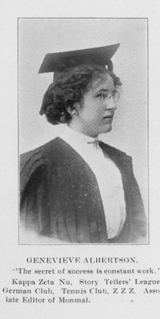 Miss Genevieve Albertson personified the prestige and quiet dignity of Montana Western for almost a half a century.

Miss Albertson was born March 23, 1891 at Saguache, Colo., and came to Montana in 1907 when her family began ranching in the Twin Bridges area. A graduate of Montana State Normal College in 1912, she received a Bachelor of Pedagogy degree. Following graduation, she taught at the Eureka Elementary School until 1916, Harden High School from 1916 until 1921. During that time, she completed work toward a Bachelor of Arts degree at Montana State University at Missoula (Now University of Montana.) She joined the Montana State Normal College (Now Montana Western) as an instructor of English in 1921 and continued her career until retirement. She became chairman of the UMW English Department in 1921 and retired as professor emeritus July 1, 1961.