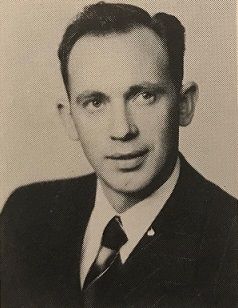 Awarded to a Montana high school graduate who plans to teach in Montana. Based on leadership, citizenship and financial need.

H. Kleis Larsen, 93 of Grants Pass, passed away Sunday, January 28, 2007 at Three Rivers Community Hospital in Grants Pass.
January 25, a tough ninety three year old man walked into the hospital in Grants Pass Oregon, a long way from the Montana he loved. Three days later he succumbed to the prostate cancer that had been irritating him for five years.. In his apartment was found a box proving the value he had to so many people. In the box is a scrapbook with hundreds of letters from children who wanted to say goodbye upon his retirement as the principal of the Franklin Elementary School where "Mr. Larsen" was principal for thirty years. At Franklin he was always actively involved with the PT A, the athletic teams, the Boy Scouts, and the music program. Previous to Franklin, Mr. Larsen had taught at Willard and Central Elementary Schools and before that in Custer Montana. Also in the box is a plaque thanking him for his several years as president of the Missoula Lions Club. Another plaque thanks him for his major contributions as president of the Rocky Mountain Ski Patrol. The Montana Education Association and the National Education Association thank him for years of membership and work with the "Legislative Committee" to lobby for quality education in Montana. Kleis was a builder during the summers when school was not in session. He built his first home near his beloved UM on South Fifth Street in 1939, the year he married Rae Harrington, the wife he was to love for 65 years. This house was followed by a bigger one for his expanding family which he completed in 1946. He graduated from Western Montana College of Education and continued with a Masters Degree from UM. He, with his kids, tore down the old Prescott School and moved the bricks cross town to rebuild as an apartment. He built seven summer homes for people on the lakes along the Swan River. After retirement, he moved to Flathead Lake where he continued building. He added on to his home there and built the volunteer fire department building at Big Arm.