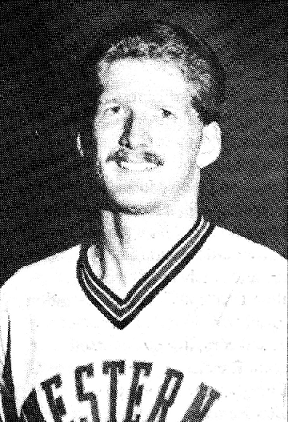 Awarded to a men’s basketball player with preference to an out of state student.

Originally from Eugene, Ore., Mike Vanderzanden came to Western Montana College (now Montana Western) in 1986 to play basketball under legendary coach Casey Keltz. Mike played center at Sheldon High in Eugene for coach Chuck Johns, a Western Montana graduate. When the 6’10” Oregonian first visited Dillon, he had never been to Montana before and was taken aback by the expansive landscape and the snowstorm that welcomed him to the state in May. “I wasn’t quite sure what I was getting into with this small university in southwest Montana,” Vanderzanden said. “It was a lot to take in for a kid from suburbia. The decision to come out to UMW forever changed my life for the better, however.” He had taken a break from his education after high school and was in his words, “a little adrift.” Mike came to Montana Western looking for the next step in his life. “After meeting with Coach Keltz and others, I knew right away that Montana Western was going to be my home for the next four years,” Vanderzanden said. “Coach Keltz gave me an incredible opportunity and quite honestly, took a leap of faith by giving me a scholarship to become a Bulldog.” Mike played for the Bulldogs for four years and was part of the 1989 Men's Basketball Team that was inducted into the Montana Western Athletic Hall of Fame. Mike graduated from Montana Western in 1991 with a business administration degree. He moved back to Oregon, beginning his career in global supply chain operations where he spent 20 years at Nike Inc. and most recently, six years at Columbia Sportswear in Portland, Ore. He worked with Montana Western in 2014 to establish the Vanderzanden Family Scholarship. The scholarship specifically supports an out-of-state men’s basketball player. So far the scholarship has benefited two student-athletes since its inception. “I contacted UMW about setting up a scholarship endowment because I want other out-of-state basketball players to understand what I call the “Montana Experience,” Vanderzanden said. “Montana is a special, welcoming place and I really feel like not just the Dillon community took me in, but the entire state.”